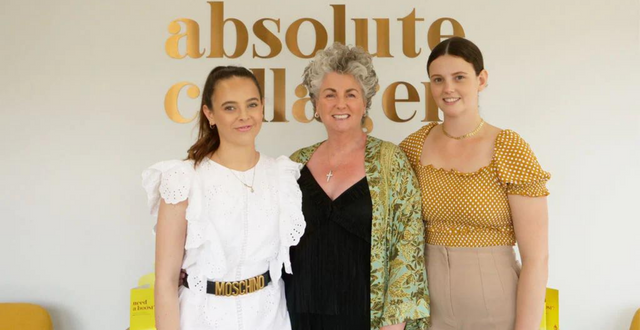 Maxine Laceby set up Absolute Collagen at the age of 49 after boiling up bone broth from her kitchen table and seeing the benefits. Four years later and the cult collagen supplement brand has a multi-million-pound turnover, a 40 member-team and a devoted following of ‘Absoluters’. Here, she discusses the power of starting a business later in life, why age and experience can help you to listen to your instincts, and how being an everywoman award winner has influenced her vision to empower women.

How did you decide to set up Absolute Collagen and why?

I stopped work at 25 to look after my stepchildren, and my husband and I then had children of our own. I was a happy stay at home mum — and eventually a single mother by choice, when I split up with my husband 11 years ago. I always knew I would do something though, but the timing was never right. But when Darcey, my eldest, went to university and my youngest was doing her A levels I suddenly realised, ‘Nobody needs me anymore, this is amazing’. So, I started a fine art degree at 49. [I realised that] as a woman and a mother I gave everything to my family [...] and forgot about myself. [So] one of the first things I did was look at myself physically and start making and drinking my own bone broth, which made me feel really good. My friends soon started asking me to make it for them too.

When I left my broth to cool it would form a jelly on top — I worked out this was collagen and decided to create a supplement for myself and my friends. So, I did some research and talked to a lot of people and through that I found out that collagen is a protein but when it’s hydrolyzed or broken into very tiny particles the body can absorb it. Marine collagen is superior, but I didn't want fish to die for my product, so the product had to be a by-product of fish heading for human consumption. And I knew there should be 8g of collagen because any more than that and I would just be stressing the body. I also didn't want any other ingredients in it — collagen is and always has been the star player.

What were the benefits to starting a business as an older woman?

No one took me seriously, initially. As a woman of a certain age, I was dismissed. and that actually worked in my favour because I came in under the radar. I knew I wanted to go straight to the consumer but back in 2017 I was repeatedly told by people that I had to be in Boots or Holland and Barrett. My frame of reference was always that the product worked though, and I just wanted to bring it to as many people as possible. I’m dyslexic and have ADHD so my kids are used to me going off on tangents, and it wasn’t until I kept running out of stock that Darcy asked me If I wanted some help. Initially, businesspeople I spoke to said the product was too cheap, because they were comparing it to others on the market. I had to go into my psyche to understand why I believed in my price point. And I realised that I come from a line of strong females who’ve dedicated their lives to their families, asked for nothing and had little. I think one of the successes of collagen, is it talks to ‘the unseen’. I'm very much the brand; our voice talks to people like me.

How do your brand values mirror your own outlook?

My original purpose was to bring the product to as many women as possible, but my bigger purpose is to empower women. Any creative comes by me and Darcy, and we always look at it and ask are we tapping into female insecurities? And if we think we are, we don’t do it. We’re all about being the best version of you, and the business is run on SIR principles — every consumer deserves to feel Safe, Important and Respected.  Everything we do is organic in growth too — we don’t use influencers for example. I remember someone saying early on ‘you’re going to have to hook your customers in’, and I replied, ‘I don’t want anyone if I have to ‘hook’ them in’. Word of mouth was very powerful in the beginning for the product. I do what feels right, and that comes back to being an older woman — I know I can trust my instincts. And everything I’ve learned from being a woman and mother I can apply to the boardroom. For example, I’m able to walk into a room of children and feel who’s hungry, who’s missing their mum — and it's not a spoken thing. And it’s the same in the business — you have to be able to look around customer service or sales and sense how is everyone feeling today. Younger women have this sense, but I think maturity enables you to listen to it and acknowledge it.

What advice would you give to older female entrepreneurs thinking about setting up a business?

Many women will remain standing, thinking what happens if I take that next step? At some point, you have to take that step and be prepared to fall. Because I knew this product was good, I couldn’t hold myself back. I put money in the business initially and it was a calculated risk, but again that comes with age and being able to think things through. I made many mistakes, but I call them missteps, because they’re part of the process. Anybody who's going to do anything will 100% make mistakes and that’s fine. If you keep making the same mistake, time and again though, you might want to look at yourself. You should learn through your mistakes. I remember ordering too much stock in the beginning, which all went off, for example, and I had to throw away. Men will say, everyone's winging it, whereas women say we’re learning on the job, and there is a fundamental difference. Ultimately, listen to yourself and be true to who you are, because if it doesn't feel right, it’s probably not and you’ll see it further down the road, Also, ask for help and have fun.

What is your vision for the future of your business?

We have an engaged community of ‘Absoluters’ and they are always open to us asking them questions because we want to offer solutions — and that really excites me. I really now sit in meetings as ‘the consumer’, not as the founder. I’d originally said I want in and out of the business in three years, but last year I asked the team what they wanted to do, and the main players said to carry on, so we secured investment. We'd come to that juncture as one of the fastest growing brands in UK and we chose our investors because they shared our values — but, importantly, we didn't need them. We got them because we thought it was best for the business.

You were the Demeter Award winner at the 2020 NatWest everywoman awards – how has award added to your success?

It’s always brilliant to be with like-minded women — they carry you and you carry them and that support is amazing. I love what everywoman stands for and it's definitely raised my profile — people say to me now, ‘oooh you’re an everywoman’. For me, though, being part of everywoman Is about being part of something special that women have grafted really hard to create.