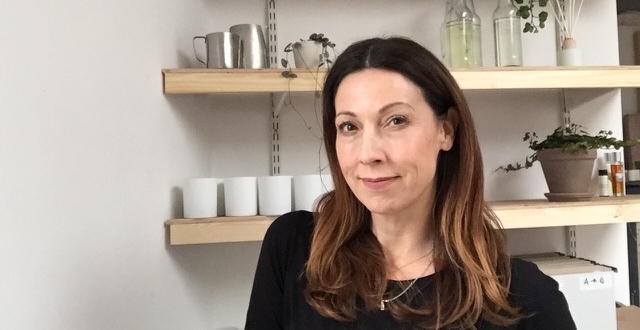 A pandemic might not be the obvious time to start a business, but for many people dealing with redundancies, financial worries or just lockdown frustration, the crisis is galvanising a tide of entrepreneurialism. Indeed, the number of new businesses registered in the UK in the third quarter of 2020 increased by 51,269 (30 per cent) compared with the same period last year, the largest third-quarter increase since 20121. But what is it like to set up your first business in such challenging conditions? We talked to Jenny Freebury, founder of Crouch End Candles, about how she turned her hobby into a business following redundancy in lockdown, and why community and connection have played a huge part in her success.

I'd been in the fashion industry for 20 years and wasn’t anticipating a change of career.

In January 2020, my husband and I started new jobs — and 12 weeks later we went into the pandemic. For the first three months of the pandemic, I continued working full-time from home as a design manager for an online retailer but then I was made redundant in June. I didn't really want to think about what was going to happen, having lost my job in the middle of a pandemic and knowing that so many other people in my industry were in the same position. So, I poured myself into making candles as a bit of a crutch and I eventually thought, ‘Let's see if this could go somewhere’.

Making candles had been a side-hustle since 2019

When I’d started making them as an antidote to the stress of the fashion world. A school friend runs a candle company on the Wirral and held a candle-making day for my hen weekend which inspired me to start. She gave me some pointers but told me that I’d have to learn the craft in my own way — everybody makes candles slightly differently; it is very personal process, and much more than just putting wax into a container. When I started to see the candles as a potential business, I made a website and began leafleting locally. Then people started to pick up on Crouch End Candles via Instagram and Facebook and orders began to come in; people were spending so much time in their own homes last year and I think candles were an easy way to create ambience and self-care. They also started ordering them for gifts, especially ‘Hug’ which quickly caught people’s imagination.

It was useful in a way to feel I had no choice but to start a business.

I had nothing to lose and had the pandemic not happened I’m sure I'd still be doing the same thing that I was doing this time last year. I think a lot of people are in my position and I know at least one other local business, a sourdough bakery, that started during the pandemic. It really encouraged me to know there were other people in the same situation, trying to do creative things with their circumstances. Fortune favours the bold I think, and the business’ growth was quite organic; I don’t remember ever thinking, ‘Right, I'm really going to go for this’. One thing led to another and I just didn’t stop it from happening and that’s been good, because I probably would have scared myself if I had tried to ‘make it happen’.

It was a challenge setting up a sensory business at a time where no one could smell the candles before they bought them.

Smells evoke emotions, whether that’s fresh grass, a cup of coffee or something personal, so it was important to me to name my candles in such a way that would inspire a memory or a feeling, and that the emotions behind the candles were authentic too. That really seemed to resonate with people. I was desperate to hug my mother, for example, and asked people on Instagram whether a hug would smell deep and dark or light and joyful to them. Most people were looking for a ‘happy hug’, which ultimately influenced the ‘Hug’ candle to be a happy, vanilla, magnolia blossom and sandalwood scent. If I had just called a candle ‘coconut’ I don't think it would have the same resonance with people as, say, ‘Beach Bum’ — another candle which was born out of my longing to be on a beach. And I was sure other people were feeling the same. That scent is coconut with a sandalwood undertone so it’s not too sickly, but it evokes the ‘end of the day on a beach’ baked-in, suntan lotion and salt smell.

Community was a major factor in the growth of the business

Both through the local community in Crouch End and the surrounding area as well as online, through local Facebook forums, Instagram and the website. I've lived in this area of north London for nearly 25 years and it is a place with a big sense of community and a small village feel. If you go into a shop a couple of times, they’ll remember you and say hello, and I think that community spirit has really been amplified in the pandemic. I get a lot of repeat business and word-of-mouth recommendations and local businesses have been very supportive of each other here, through the pandemic too; my hairdresser even put my candles at his cutting stations to showcase them when he was allowed to open in the summer.

I started selling a few candles and orders quickly grew from 50 in July to over 200 a month within a couple of months.

Initially, I used a small wax melter in the kitchen that held a litre of wax and things continued like that for most of the year until the middle of November when things went very quiet. I remember saying to my husband, ‘well, it’s been great while people have been locked in their houses, but now they can go back to the shops it’s going to peter off’. And then on the 26th of November the floodgates opened — the Shopify app on my phone started pinging … and didn’t stop. My husband ended up delivering candles as fast as I could make them and, in the end, I had to put ‘sold out’ on my website to have enough time to make all the orders I had in time for Christmas. It got to the point where so many people had asked for local delivery, we knew that we wouldn't have the time to deliver. So, I asked people if they’d be happy to collect instead and everyone said yes. I set up a pickup point in my hallway and sat there for a day and at points there were queues outside my house.

According to one of my customers who studies socioeconomic groups, and from an anecdotal point of view I can definitely say that people now seem to be ‘looking for local’ and making conscious decisions to buy something from ‘just down the road’. But I've also got pockets of people around the country now who are buying the candles online too. I’ve started to do refills, filling up empty candle glasses from any company and my sister’s whole village has just sent a box of 60 refills to make up.

The way I operate will have to evolve when we come out of lockdown, but I still believe that people will want to buy local

Community will definitely continue to be a big part of my strategy. People will always want to smell candles and hold them and although I know that everyone is all about digital these days, I still have a dream to have a physical candle shop of my own at some point. I’m also talking to shops around the country now that want to stock the candles, including a couple in Scotland and Cheshire, and I have just got my first wholesale order which is exciting and takes it to the next level. I moved production into a studio in January 2021 which now means I have got space between my business and my home, something my husband is quite relieved about — and importantly a place to expand into this year, which is really exciting.