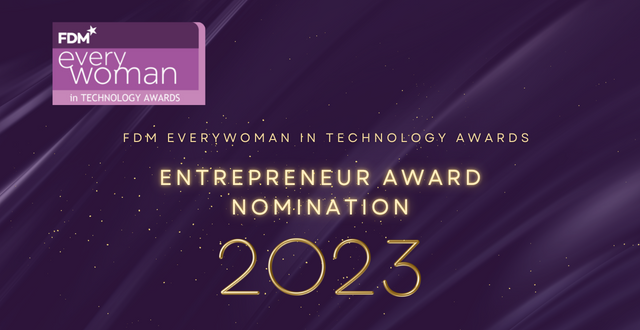 The annual FDM everywoman in Technology Awards are open for nominations for 2023. The awards celebrate the tech industry’s most exceptional talent, from the UK and beyond, creating role models to inspire the next generation.

Nominations for the 2023 FDM everywoman in Technology Awards are currently live till the 10th October 2022 and is the perfect opportunity for all Tech Entrepreneurs to nominate themselves for the entrepreneur category! This award is awarded to an owner/operator of a technology business whose vision and talent will inspire others to start their own technology-related venture. The business must have been trading for a minimum of 24 months. We are pleased to highlight the Entrepreneur Award supported by The Howden Group for the second consecutive year.

Since the awards were founded in 2010 the technology industry has made great steps forward in terms of gender diversity. The industry has seen an increase in women and those in senior leadership roles, more visibility of successful female role models, and the rapid growth of initiatives to encourage more young girls into STEM subjects.

As an innovative industry, new sectors and specialisms continue to rise and lead to more opportunities, and this growth is not slowing down. In March 2022, the UK’s tech ecosystem became the third country to hit a $1trillion valuation after growing by 42% between 2020 and 2021, largely as a result of greater investment in software and digital companies at the start of the pandemic.1

Despite these positive strides, the tech industry is facing a recruitment crisis and needs to address its diversity and inclusion as a social and economic imperative to drive future growth.

Currently, only 24% of people working in STEM in the UK are women, which is expected to increase marginally to 29% by 2030, and women still only account for 10% of leadership roles in the industry.2 And for those women in the UK’s $1trillion industry, they face a 2.8% gender pay gap.3 It’s estimated that to achieve gender parity in the technology sector in the UK, one million women need to be hired and that this shift would benefit the economy by £2.6bn4.

Maxine Benson MBE, Co-Founder of everywoman comments: “Addressing this gender gap is why these awards were originally established in 2010. The ongoing requirement to both attract and advance more women in this industry has never been more urgent. The past 13 years has produced so many stories that demonstrate the impact of this programme in achieving that goal. These awards showcase the diverse, fulfilling, and exemplary careers that women can have in technology and how they really can make a difference to people’s lives.”

“FDM is thrilled to be continuing our headline sponsorship of the FDM Everywoman in Technology Awards in 2023. It’s been great to see how gender equality has progressed in the UK since the awards began and we cannot underplay the importance of such events. We must continue to shine a spotlight on the incredible female talent we have in this country, and this has been clearly evidenced through the amazing achievement of our Lionesses this summer. There are more women role models, champions, and male agents of change than ever before but still not enough. The proportion of women in the STEM workforce has increased from 11% in 2012 to over 24% in 2022, and today there are no all-male boards on the FTSE 350, compared to 2012 when there were 126.

We are excited and looking forward to applauding the nominees for this year’s awards.”

The 2023 FDM everywoman in Technology Awards are free to enter and the categories can be found here. The awards ceremony will take place as a live dinner at the Park Plaza Hotel in London on 9th March 2023.