On Ageism and Risk-Taking with Therese Tucker 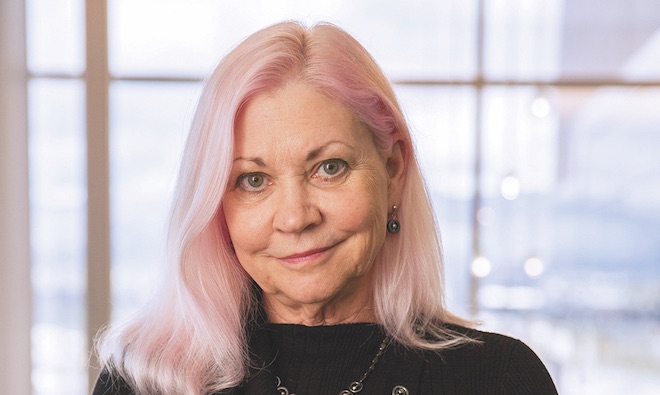 Therese Tucker founded tech company, BlackLine, when she was 40 years old. Here, she talks about why age diversity matters. While working as Chief Technology Officer at SunGard Treasury Systems, Therese Tucker listened to an accountant complain about the clunky, manual process used to balance a bank’s books. And she took notice.

Tucker was also a software programmer, so decided to try and develop something that would automate accountancy. In 2001, BlackLine was born.

Getting it off the ground, however, was a separate challenge. To make it happen, Tucker had to use all of her retirement savings and borrow thousands of dollars from friends. If she could have got her hands on her children’s college funds, she says she may have spent that too. Where did this confidence in her business come from?

‘It could be confidence, it could be craziness!,’ she laughs. ‘I was 40 when I started BlackLine. I had never been a CEO before, had no pre-existing customers and no knowledge of how to seek outside capital.’

‘At the same time,’ she continues, ‘I was a very good programmer and it was pretty clear that we were providing software that provided a lot of value… rather than spend all my time seeking capital that I wouldn’t get, I thought, “Well, I’ll keep pouring my own money into this until it becomes self-sustaining”. And it did. It was very scary though.’

It certainly did. Today, BlackLine is worth more than US$2.5bn, boasts 100 clients from the Fortune 500 list (including Coca-Cola, Hyatt and eBay) and employs 850 employees globally. Tucker has also collected too many accolades to list, including Accounting Today’s ‘Top 100 Most Influential People in Accounting’, while BlackLine has been listed by Deloitte as one of the fastest growing technology companies in North America for the past nine years.

So, crazy or otherwise, her risk paid off.

Tucker may have made it big, but make no mistake – she did so in an industry stacked against her.

‘I hate the culture of tech for women,’ she says. ‘It’s reflective of the culture at large, and it’s not good,’ explaining that the #MeToo movement has yet to reach tech.

When asked if she feels that not just gender, but her age has acted as a barrier, she offers an illustrative anecdote.

‘I went to a banker conference and had my chief revenue officer with me, who’s a tall square-jawed guy. The investor comes in, looks at my CRO and says, “Why don’t you tell me about your company?” I leaned forward and said, “Well since I’m the one who founded it, why don’t I tell you?”’

The investor was keen to become involved with BlackLine, but Tucker didn’t let him get away with his error.

‘I said, “Well I’m not so sure. You didn’t even know who the CEO was.” His reply? “Well, you’re kind of an older matronly lady, so I just assumed.” He actually verbalised that thought. I was blown away that somebody would say that.’

Ageism in the tech industry is rife; according to one survey of US start-ups, it begins – on average – at 46 years old. Tucker is unsurprised at this figure, but insists, ‘Not at BlackLine.’ Age diversity, she continues, is of paramount importance. ‘Nothing can replace the wisdom that age can bring. If you’re a fast-growth company with only young people, you can get destabilised very quickly.  We’ve seen that with some of the larger tech companies.’

The younger generation, for their part, ‘Utilise tech like it’s a fifth limb, and have thoughts about usability and structuring that is very valuable. That may not be present in an older employee.’

The fear of being ‘left behind’ when it comes to tech knowledge is a real concern of older workers – a survey by TechPixies found that a third of women between 35-54 (who’d returned from a career break) were concerned about how their digital skills measured up. And while it may seem that the CEO of a billion-dollar tech company would be established enough to avoid such concerns, Tucker is not afraid to admit, ‘I feel that too.’

‘I don’t code anymore,’ she continues. ‘The thing about tech is it moves so quickly, so if you’re not “in it” all the time, you do feel left behind.’ Her advice is to read up on latest developments and converse with people who are up-to-speed, to at least have a sense of what’s going on.

Most would agree with Tucker that all ages bring something valuable to the table, but how easy is it to create successful teams that can span up to five generations?

‘What people want from work is very common,’ she says. ‘We want to contribute, to be valued, to have respect, to have great feedback and we want to grow. If you’re hiring the right people, those characteristics are common to everybody.’

The differences, she explains, are more stylistic. ‘I’ve heard people say, “Oh Millennials don’t like to work hard.” They work incredibly hard. But at the same time, they want a level of flexibility that may not be comfortable with someone who’s a bit older.’

Citing a situation in her own office, where a younger employee wanted to work not only remotely, but from a different state altogether, she explains that the initial answer was, ‘What? No! You have to work in the office like everyone else.’

But a contract was negotiated with very clear terms regarding expectations, and ultimately it turned into an arrangement that worked.

Working through such issues to facilitate integration is vital, says Tucker, because diversity is key to success. ‘The business is stronger if you have different approaches, mindsets and ways of structuring things... the sum of the parts is greater than the individuals and you end up with better solutions to every problem.’

Tucker is a tireless advocate for diversity in tech – even her trademark pink hair is a comment on ageism. (She was dared to do it after saying a grey-haired woman, ‘could lie on the floor and still not be noticed.’) So, do more tech leaders need to be just as outspoken? ‘More people need to do more, it’s not enough to simply be an advocate,’ she says. ‘Even at BlackLine, we don’t have as much diversity as I would like,’ citing difficulties in finding, for example, female programmers or women in software sales.

Action needs to be taken at a younger age, so BlackLine has an internship programme that focuses on diversity, plus run schemes such as hosting high-school girls to get them interested in tech.

‘It’s so hard to find the diverse candidate set that you’d like,’ concludes Tucker, ‘you have to help build the pipeline for that.’